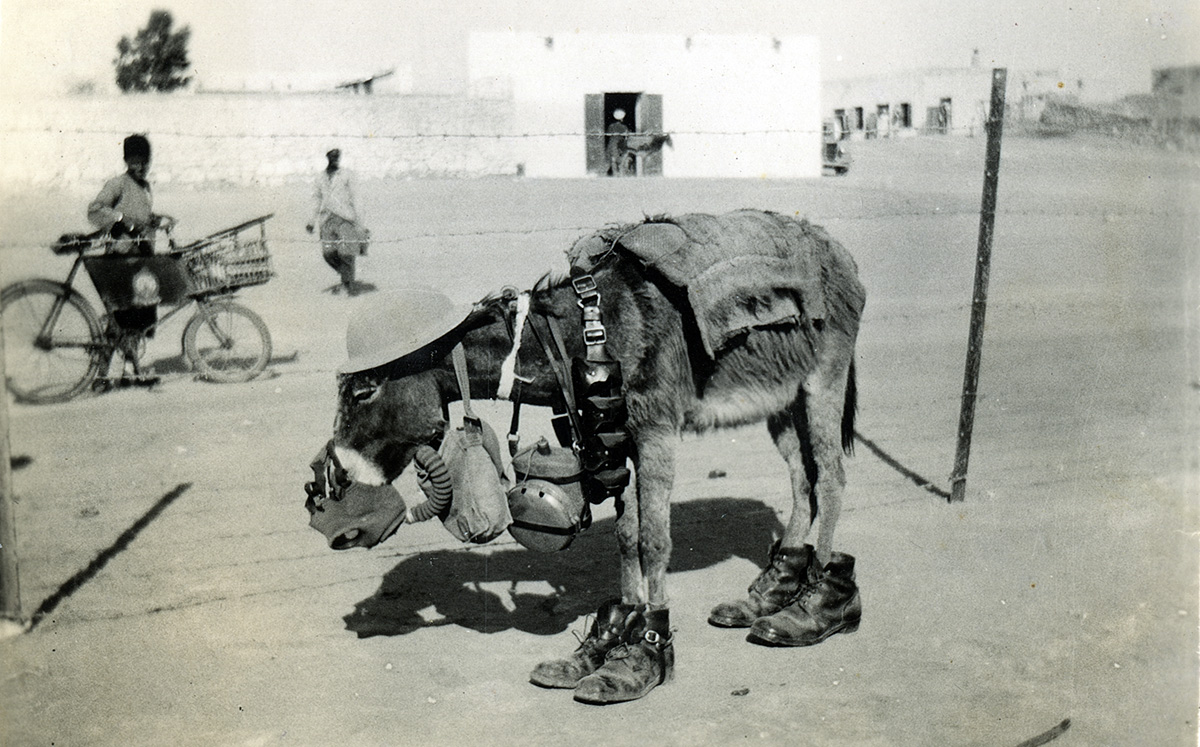 A donkey at a British military base in Egypt during WWII is dressed up like a soldier all the way down to the boots. Norbert Schiller Collection

Donkeys and mules have had a long and distinguished career in modern military warfare. During the two world wars, they played a key role in transporting supplies over rugged mountains and jungle terrain inaccessible to motorized vehicles. The practice was extended to the colonial and Cold War eras where the animals were used by British troops stationed in Egypt and Palestine and American soldiers during their short-lived invasion of Lebanon in 1958.

During the World War I Battle of Gallipoli, a medic from New Zealand named James Gardiner Jackson took a photograph of a fellow countryman transporting a wounded soldier to a field hospital on donkey back. The photograph became immortalized when artist Horace Moore-Jones, another New Zealander who also fought in Gallipoli, drew a number of paintings based on that image. It turned out that the stretcher-bearer, Dick Henderson, had used his donkey to save many other wounded soldiers. Today the paintings hang in war memorials and museums in New Zealand and Australia and are meant to symbolize sacrifice. James Gardiner Jackson’s photo of a wounded soldier being taken to a field hospital on the back of a donkey inspired Horace Moore-Jones to paint his iconic watercolor. Source (R) Alexander Turnbull Library, Wellington, New Zealand

Mules were also heavily used in World War II. In the Allied campaign against the Japanese in the Philippines and Southeast Asia, the animals were used to carry heavy loads through the jungle. They were also often the first line of defense protecting soldiers from shrapnel when bombs landed nearby. In order to meet the demand on the battlefronts in the Pacific, mules were ferried on ships from the West Coast of the United States. The Japanese sank two such freighters killing all animals onboard. On the Italian front, mules were procured locally as the US and British military made their way up the boot of Italy. In exchange for the animals that were confiscated from farmers, the US military offered vouchers to be used later for reimbursement.

The major drawback of using mules and donkeys near the frontlines was their loud braying. In order to circumvent this problem, the military had the animals’ vocal cords removed. Another challenge was that some of the Italian donkeys were white making them easy to spot by the enemy. To remedy this problem, the donkeys were dyed a darker color.

In 1958, US President Dwight Eisenhower dispatched his marines to Lebanon to rescue the country’s Christian leader from the threat of an increasingly popular pan-Arab movement. President Gamal Abdel Nasser’s call for Arab unity was gaining ground among Lebanon’s Moslems, while it was feared by Maronite Christian President Camille Chamoun. Since Nasser was allied with the Soviet Union, Washington was even more motivated to get involved in what became its first military intervention in the region. Although the marines did not engage in any significant military exchanges, they stayed for three months. During that period, they bought donkeys on the local market for as little as five dollars (50 dollars today) to assist them in carrying their supplies.

After US Marines were deployed to Lebanon in 1958 they used locally purchase donkeys to help carry supplies. Norbert Schiller Collection

Donkeys and mules continue to be used in recent conflicts such the war in Afghanistan. In this country’s rocky and steep terrain, donkeys are often the only means available to transport supplies and weapons. They are indispensible when mountain passes are closed or when flooding knocks out roads and bridges.

Mules and donkeys have also been used for less glorious purposes during times of conflict. In Egypt and in Palestine, where donkeys are found in abundance and are used by the local population as the main source of transportation, British soldiers used the four-legged beasts as a source of entertainment. Some of the negatives in my collection show British soldiers in an army camp riding donkeys instead of horses to play polo. Other negatives from Palestine show soldiers at a donkey race. The series includes a number of shots showing different phases of the event. First donkeys are loaded off a truck and then they’re paraded in a circle as soldiers look on. Other shots show soldiers lined up outside a tent waiting to place bets. Finally there are photos showing the actual race with donkey and rider jumping over obstacles at a course.

A game of donkey-polo being played at a British military desert camp in Egypt. Norbert Schiller Collection

Whether they were used to assist soldiers on the battlefront, or give them the opportunity to burn off steam around base camp, donkeys and mules have proven to be reliable, hard-working, patient and even heroic companions. They have most certainly earned their stripes. Soldiers play donkey-polo at a British military base in Egypt during WWII. Norbert Schiller Collection Donkeys being delivered by truck to the racetrack. Norbert Schiller Collection Donkeys being paraded before the race. Norbert Schiller Collection Soldiers line up to place their bets. Norbert Schiller Collection A soldiers gets back on his donkey after falling off. Norbert Schiller Collection